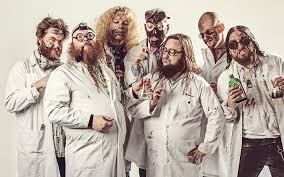 An evening called  “Pagan metal”-party at the Rocking Chair in Vevey :

Korpiklaani from Finland, Hypocras from Switzerland, Heidevolk from Netherlands and finally Trollfest.

This is true Norwegian Balkan Metal which develops a unique musical style that includes several genres including humppa, tango, reggae, waltz and ska… Trollfest does not use a synthesizer, but rather folk instruments including acoustic guitar, accordion, trumpet, mandolin and banjo.

Most of Trollfest’s lyrics are written in a language called “trollspråk”, which is a mixture of Norwegian and German. At first, the group decided to sing only in German, a language that seemed gloomy. However, none of the members apply in German, and they subsequently decide to adapt their texts into a whimsical German grammar. Their words are superficial and meaningless.